The veteran star lists his favourite biryani joints, working in ZEE5 Original film Daawat-E-Biryani and being fed biryani by Rakhee Gulzar. Read on. 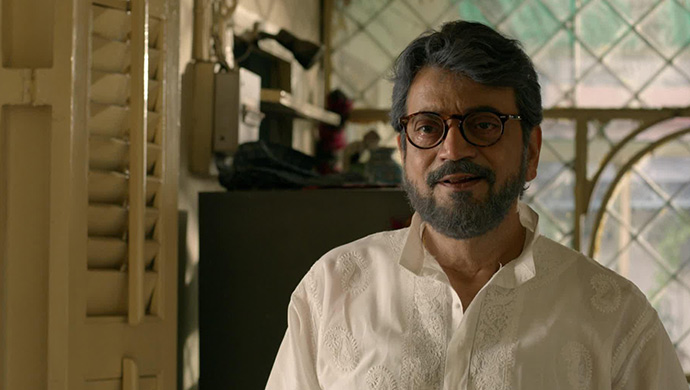 A love story with biryani at the heart of it. That’s what ZEE5 Original film Daawat-E-Biryani is. In this latest Bengali film, Ranojoy falls in love with his best friend Mansoor’s sister Aafreen (played by Suhasini Mulay), who is a great cook. He gifts her a diary which has a recipe of biryani by Nawab Wajid Ali Shah’s cook. However, she leaves the precious diary behind when she is forced to elope with Ranojoy. Years later, their granddaughter Panchali (played by Sauraseni Maitra) goes to Lucknow to try and retrieve it. In Daawat-E-Biryani, veteran Tollywood star Chiranjeet plays the role of the older Ranojoy, who craves for Aafreen’s biryani, but doesn’t find the same taste in the biryani anymore without that old recipe. We caught up with the actor about biryani, working with Suhasini and more. Here are edited excerpts:

Q. What made you decide to do the ZEE5 Original film Daawat-E-Biryani?

A. Initially, I did not want to do it. Then Bumba (Prosenjit, also the presenter of the ZEE5 bouquet of ‘food films’) requested me saying please do it. Soumitrada (veteran actor Soumitra Chatterjee) was supposed to play the role of Ranojoy, but he was very sick and hospitalised so he could not do it. Bumba told me that shooting starts from the day after and if I didn’t do it, he would incur a lot of losses. Then I read the script of Daawat-E-Biryani, liked the role and decided to do it.

Q. How did you prepare for the role of Ranojoy?

A. It is a regular character. I have played similar roles a lot of times earlier. However, I needed to prepare for the Hindi dialogues. Suhasini (Mulay) helped me with the Hindi. For instance, words like din and deen. One means day and the other, say Deen Dayal Upadhyay.

Q. How was the experience of working with Suhasini Mulay?

A. Suhasini is my heartthrob. I liked her right from the time when she did her first film Bhuvan Shome. So for me, working with her in ZEE5 Original film Daawat-E-Biryani was a thrilling and wonderful experience.

Q. You have done close to a 100 feature films. How was the experience of working in OTT?

A. For me it is almost the same. Just that films are more lavish as the budgets are higher. Web is cheaper, it’s like how we do TV films. Also, OTT is more commercialised, so there is a difference in concept. Films are like finer art.

EXCLUSIVE BTS: Check Out All The Photos Of Daawat-E-Biryani Actors Shooting In…

Everyone Wanted To Have Biryani Whenever, Wherever During Shoot, Says Director…

Q. Any memorable foodie moments during the shoot?

A. I never thought there would be a film on food. Earlier there were some films on food. Now, it is a category. When Maacher Jhol released, the name felt strange. It was a good movie, though. The same trend continues with the food movies where the film is based on a dish.

Q. Are you fond of biryani? Any favourite joints?

A. I love biryani. India Restaurant in Khidderpore is my favourite. It is the best. I have experimented a lot with biryanis. Zeeshan and Aminia are good too. I prefer the dry biryani to the soggy version. I have a great biryani memory. In the early days of my career, I was shooting for the movie Pratik in Siliguri in which Rakhee (Gulzar) played the role of my mom. It was Roopa Ganguly’s first film. Rakhee is a good cook and one day, she wanted to feed biryani to everyone. So she gave me the task of getting all the ingredients. Ami baajare giye niye elam and she made the biryani. It was wonderful.

Q. What is keeping you busy these days?

A. I am busy with my politics, drawings, writings…I recently did Water Bottle for ZEE5. I have another movie, Buro Sadhu, coming up in November along with a couple of other movies. I am also starting work on another movie in November.