We all have those moments of our favourite onscreen couple from Nakshi Kantha. But do you know Suman’s favourites? 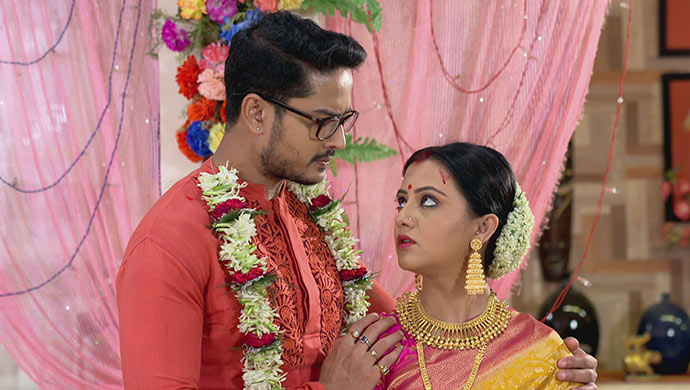 In the latest Bengali TV serial Nakshi Kantha, Jash (played by Suman Dey) has fallen prey to Rohini and Swapnadip’s conspiracies and has married Rohini. Even though Shabnam (played by Manali Dey), rushed to meet Jash right after she got her memory back, it was already too late and the damage was done.

Not just that, post the wedding, Swapnadip and Rohini tried their best to turn Jash against Shabnam, saying that she has already found someone, which is why she did not fight for Jash and even though she was in Kolkata, she didn’t contact Jash. A heart-broken Shabnam has decided to not interfere in Jash and Rohini’s married life and give him a divorce. However, after much prodding from Debdeep and Rahulda, she has agreed to visit the cops to find out who tried to drown her during the honeymoon trip to Sukhsari. Watch the latest episode here:

Since it looks like Jash and Shabnam are going to stay apart till some twist of fate. But we all are missing them together. So we caught up with Jash aka Suman to list down his favourite Jash and Shabnam moments. Read on:

Suman: The second is when her father was forcing her to marry an old man. I went and saved her. Her father asked me basis what right I was trying to save her or take her away from here. He was about to slice me with a sword. I stopped the sword with my bare hands. With the blood that was oozing out, I used it to apply sindoor on Shabnam, saying that she is my wife. From now on, she is my responsibility.

Suman: The third is a dream sequence where we sing O Tere Sang Yaara from the movie Rustom. (P.S., Suman actually sang this in the voice note he sent us on WhatsApp and we can vouch that he is a good singer).

Suman: The fourth favourite is when we get married at Ranjapishi’s graamer bari. Those moments of Shabnam and Jash getting married and the moments post marriage are memorable.

RAPID FIRE: Nakshi Kantha’s Jash Reveals Everything About Him That You Had No…

What are your favourite Jash and Shabnam moments? Let us know in the comments section below.

Click Here To Watch The No.1 Bengali Serial Trinayani On ZEE5

Birthday Special: 5 Movies Of Swastika Mukherjee That You Can Enjoy Watching On ZEE5