The film starring Jeet, Abir Chatterjee, and Nusrat Jahan promises to be a highly engaging watch with a complex plot exploring the human psyche. 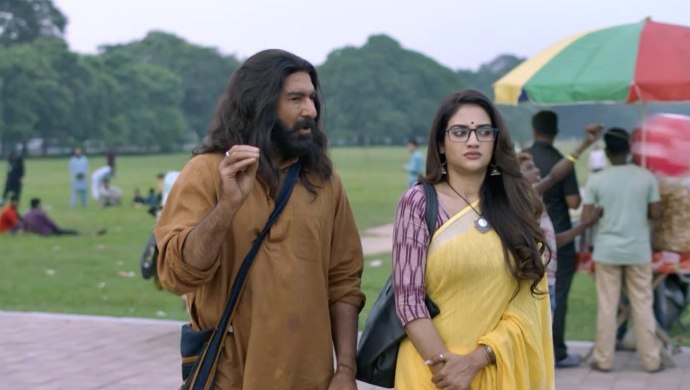 The trailer of Asur, the epic blockbuster directed Pavel Bhattacharjee, has just dropped, and we could hardly be more thrilled to catch its digital premiere on April 10. A tribute to the sculptor Ramkinkar Baij, the film has Jeet essaying the role of Kigan, an eccentric genius of an artist who has set out on a mission to create his best work yet — the largest idol of the Goddess Durga that the world has ever seen, to be set up in Deshbandhu Park of Kolkata.

In fact, this character seems to be one of actor Jeet’s best portrayals yet, as he plays a role that is starkly different from his signature action hero ones. He has grown out his hair to look the part, and displays emotions he does not usually have the chance to do.

Abir Chatterjee plays a complex character– that of Bodhi, the husband of Aditi (played by Nusrat Jahan), who secretly harbours feelings of intolerable jealousy towards Kigan, Aditi’s friend. He seems to be quiet and sober on the surface, but underneath all that calm lies a well of furiously seething insecurities. Nusrat Jahan also shines in her portrayal of Aditi, the link between Kigan and Bodhi.

Check out this message from Abir, which will give you hope during this current COVID-19 crisis:

The trailer of Asur opens with these words: “We do not understand them. We write them off as crazy. But in history, it is this madness that gives birth to new creations.” This is probably a direct reference to Kigan’s eccentric character. There are sequences of action too, where Jeet fights off some goons who try to attack him, and this definitely adds to the tension and excitement of the plot. In mythology, ‘Asur’ is the power-hungry demon who Goddess Durga defeated and emerged victorious. The film Asur explores some of the demons lurking in human beings, and what circumstances may trigger them to be unleashed.

How eagerly are you waiting for Asur to be released online? Let us know your thoughts in the comments below.

How Are Arjun Chakrabarty, Raima Sen, Chandan Roy Sanyal Dealing With The…

Watch Swastika Mukherjee Play A Conflicted Actress Fighting A Scandal In Take One, On ZEE5.