They might be fighting in Nakshi Kantha, but off screen, there is no fight between Suman Dey and Manali Dey. 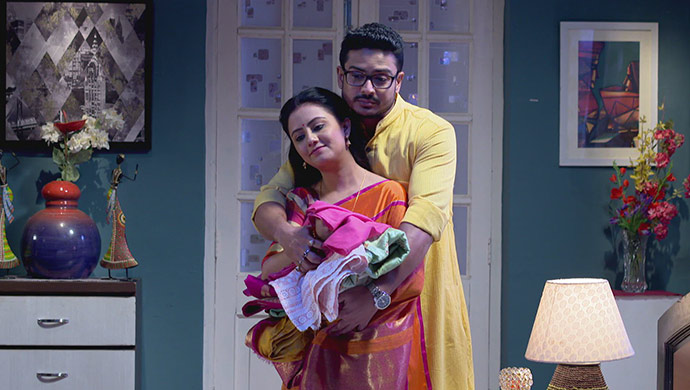 JashNam, that’s what fans call Bengali TV’s most popular couple – Jash and Shabnam. Played by actors Suman Dey and Manali Dey in the latest Bengali TV serial Nakshi Kantha, Jash and Shabnam are currently at war on screen. Shabnam has, with the support of Debdeep, decided that she will not stay quiet and named Rohini and Swapnadip as the ones who tried to drown and kill her in Sukhsari. Jash, now married to Rohini once again, is angry thinking that Shabnam is intentionally trying to ruin his marriage.

There is no love lost between Jash and Shabnam right now. Watch the latest episode here to stay updated with the serial.

While their equation on the screen is different right now, off the screen, Jash and Shabnam, aka Suman and Manali, are still great friends. Check out this cute video that Suman posted to find out more.

In the video, you see them acting out the initial parts of Tu Kaun Hai Tera Naam Kya from the movie Khiladiyon Ka Khiladi. It’s a classic song and fits in with the rest of Suman’s TikTok videos. Suman is great at covering the best of 90s Bollywood dialogues and tunes, and this one is no different. He often does hilarious video collabs with his co-stars, and we’re delighted that he finally made one with his on-screen lady love! Isn’t this video of the two of them just so adorable? It’s totally making us miss those little Jash and Shabnam moments on screen.

What other retro songs do you think they could have chosen to act out? Let us know in the comments below!

REVIEW: Watch Jeet As He Brings His Punch Back With Panther: Hindustaan Meri Jaan