Maharaja Tomare Selaam! Get set for a special episode this Sunday to salute Sourav Ganguly. 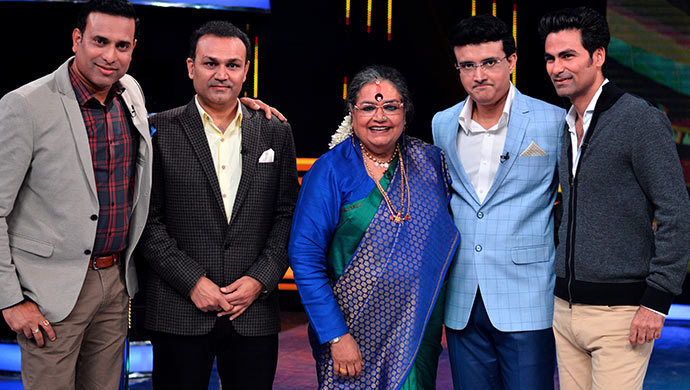 The super popular Bengali quiz show Dadagiri, in its eighth season now, has been a hit with everyone. Hosted by ex-Team India captain and now BCCI President Sourav Ganguly, it has managed to become a must watch in the weekends. Every weekend, this popular Zee Bangla show has something fun for the audiences – be it in the form of celebrity guests, or people with unique stories to share. This weekend, we got for you Maharaja Tomare Selaam, a special event to honour Dada. To be telecast on Sunday, January 12, this three-hour long episode (to be telecast between 8.30 p.m. and 11.30 p.m.) is going to have a ton of cricketing giants.

Get set to watch the likes of Virender Sehwag, VVS Laxman, Mohammad Kaif, Zaheer Khan and Harbhajan Singh and Ravichandran Ashwin play the quiz with their favourite captain Dada and engage in fun banter. From the looks of it, they have quite a bit of fun with Harbhajan even making Dada shake a leg. Not just that, there will be performances by singers such as Usha Uthup, Sa Re Ga Ma Pa fame Nobel and Ankita. As a cherry on top, Daler Mehndi will be doing a special performance too. Bhajji seems to have done a duet with Ushaji as well from the look of it, apart from doing the Bhangra with Daler Mehndi’s songs. Check out some pictures from the sets.

Sourav even posted a photo from the sets on his social media account, writing: “A great day at sets of dadagiri .. with team mates .. spent best part of our lives together …”

A great day at sets of dadagiri .. with team mates .. spent best part of our lives together …

The cricketers who are a part of this special episode have always been close to Dada’s heart. Not just that, each of them has managed to win the hearts of many with their action-packed performances on the field through the years. Enjoy the reunion between these players who once were part of the same team.

Check out these sports stars participating in the various rounds of this episode of Dadagiri Unlimited Season 8, hosted by their favourite captain and the Prince of Calcutta.

We can’t wait to witness the entire conversation between them on screen. Stay tuned to watch this interesting episode on ZEE5!

These Pictures Of Ushasi Aka Bokul From Her Egypt Vacation Are Making Us Jealous!