Mythology meets real life in this gritty crime drama where a brave cop faces off with evil beyond belief. Scroll down for details. 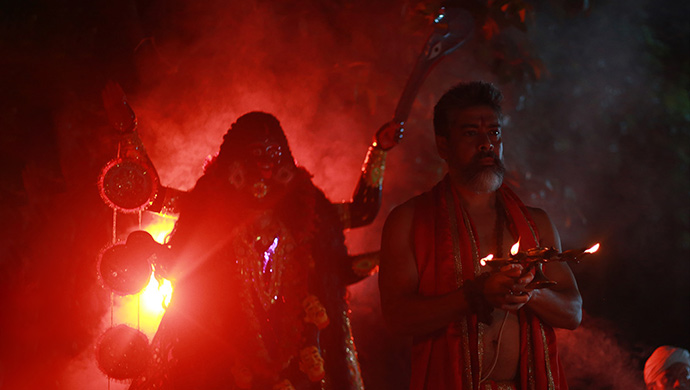 So you thought demons are a mythical concept, did you? What if we tell you that demons exist in the real world as well? And their outward appearance, at least, is that of a human? The ZEE5 Original film Ekchakra, is about one such demon, or rakkhosh. Before you watch this Bengali movie on ZEE5 on October 20, we tell you why we are so excited about the film.

Written and directed by Sanjoy Bhattacharya, Ekchakra stars Priyanka Rati Pal, Indrasish Roy, Sugato Roy, Garima Ghosh, Jayanta Biswas, Atmadeep Ghosh, Pradip Khnara and Koushik Goshwami. The Bengali film Ekchakra is about a brave an honest police officer, Zoya Rehman, who gets transferred to a village called Ekchakra. Interestingly, Bakrakkhosh, or Bakasura, who finds a mention in The Mahabharata, used to live near a place called Ekchakra, according to mythology. During their days of exile, it is said that Pandavas came to live in the village, which is near modern day Rampurhat. Bakasura was killed by second Pandav, Bhim, reportedly in a place called Bhimgarh on the other side of the river Ajay.

In mythology, Bakasura would force the king to send him a huge quantity of provisions. He would eat them up, along with the men who would go to deliver them. In the Bengali film Ekchakra, the demon takes the form of the most influential person of the village – the thakurmoshai (village priest). A former zamindar, he has created an atmosphere of terror in the village of Ekchakra.

5 Reasons Why You Should Watch Prosenjit Starrer Kishore Kumar Junior

Zoya finds the residents of the village do not like the police. Soon, she finds out that Ekchakra is the hotbed for trafficking of women and more than a thousand women have been trafficked in the last few years. She starts investigating. Her leads direct her to thakurmoshai (or Bakrakkhosh as her source called him) has managed to force the villagers to agree to his terms – to send at least three girls each month so that he spares the rest. Will Zoya be able to overcome the fear in her and confront this modern-day Bakrakkosh? Wait till October 20 to find out.

In The Mood For Some Comedy? Watch Jeet In Baccha Shoshur, Now Streaming On ZEE5

IN PICTURES: We Are Loving Cockpit Stars Dev And Rukmini Maitra’s Africa Vacation