Who doesn’t love Jash and Shabnam? Keep watching to find out if Shabnam gets justice. 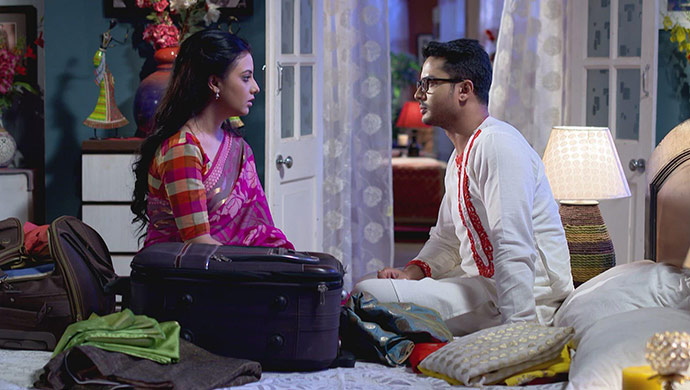 The latest Bengali TV serial Nakshi Kantha has managed to create quite some fan following. From creating monikers like JashNam for the lead characters Dr Jashojit Bose (played by Suman Dey) and Shabnam Khatun (played by Manali Dey) to fan pages and fan clubs, Nakshi Kantha fans are ruling. And thanks to all that love, this popular serial has just crossed the milestone of 300 episodes. Watch the latest episode below to find out what is happening if you have missed out watching it lately.

We asked Jash aka Suman Dey about the milestone. Here’s what he has to say: “The audience relates to me as one of their family members. I am their dinner table menu and their end of the day entertainment.” His message for fans? “I don’t want to be their boy-next-door. I want to be their moner dorjar bhetore. Posters toh baire thake. I want them to carry me with them wherever they go.”

Nakshi Kantha is primarily the love story between Jash, a doctor from a well-off family in Kolkata and Shabnam, a poor girl from a conservative family from a village in Bengal. Even though Shabnam is a good student who aspires to become a doctor, her father wants to forcibly get her married off to an older man. Enter Jash to the rescue. He cuts his hand on Shabnam’s father’s sword and that blood becomes Shabnam’s sindoor as he marries her. And after a lot of struggle, Shabnam managed to create a space for herself in Jash’s heart and house.

However, a lot has changed now. Rohini and Swapnadip’s men tried to kill Shabnam. However, she managed to survive and was washed ashore on a nearby beach where Debdeep and his parents found her. He brought her to Kolkata, got her treated (she had lost her memory) and just as they were about to get married, she got her memory back. On rushing to Jash’s and thereafter Rohini’s house, they saw that Jash – who totally went under Rohini’s influence post Shabnam’s loss  — had gotten married to Rohini. A heartbroken Shabnam decided to divorce Jash.

However, on Debdeep and Rahulda’s insistence, Shabnam decided to bring out the truth about who tried to kill her and named Swapnadip and Rohini in her police complaint. Jash, who is jealous about Shabnam choosing Debdeep, has decided that he will not stop from lying if required to save Rohini. Currently in the serial, the case is being heard in a fast-track court where Shabnam’s lawyer presented a clip of Rohini telling Swapnadip that she wants to get rid of Shabnam forever.

VIDEO: Suman Dey’s Hilarious Take On The Bitter Cold This Year Is A Must…

NAKSHI KANTHA EPISODE SPOILER: Shabnam Tells The Judge She Has A Right To Live

Stay tuned to find out what happens next.